When you are a teacher, you’re not really supposed to have favourite students, but you do, well I did anyway. I remember one, she was in my Dance class rather than my English class and she was an angel. She told me her father was an artist and so I checked out his work. I loved it immediately, I showed to to James who did too but it was definitely out of our price range. However I never forgot about this artist and secretly coveted his work, or maybe not not so secretly when James happened to be around. The problem was that he had become so successful that he’d stopped taking commissions and was involved in huge projects like the liberty window at christmas, so I satisfied myself with postcards of his work stuck around our flat.

After we returned to the flat post honeymoon, James presented me with the most enormous box. With trepidation I opened it. It was an original Rob Ryan, right there. He had contacted him, gone round to his house, sat at his kitchen table (only James) had a cuppa and a bacon buttie with him! He wasn’t doing commissions but somehow James persuaded him to do just one more. He asked James: what does Odharna love most in this world? James answered: Books and our flat. So much like the above, our piece was pages of a book and with both of us sat on the roof, gazing at the night sky.

I looked at this papercut a lot after James died and I see that we are separate in it and only connected by the stars that shroud us both on that rooftop, and I wonder did the hand that guided Ryan’s knife to cut all those pieces on some subconscious level know that  there were only a couple of chapters left in The Story of Us? The story is over now. I know that. I know that it was a shorter tale than anyone could ever have imagined, even the most gifted storyteller. 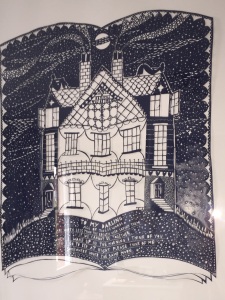