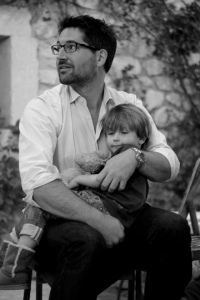 Today is Father’s Day and it’s 8.15am. I realise this is the one day you would be guaranteed a lie in (which of course you could never take because you would always say “I don’t want to miss out- I, on the other hand had no problem missing out when an offer like this was handed to me). I realise that I’m in the middle on our empty bed and the children must be downstairs. Flynn will have put Netflix on for the pair of them and he will have given his sister a snack. I mustn’t imagine in my head what would have been, as I know its purpose is torment only and there is nothing to be gained from it; but I do it all the same- the conjuring.

If you were here I would not be lying in the middle of an empty bed. I would be downstairs frantically wrapping your present because I’d left it to the last minute as usual. The children would know what day it is because we would have spoken of little else the day before and they would be so excited to be a part of organising presents and surprises for you. As it is, they have no idea, they’re different to other children now and I hate this; I know you would hate this even more. And you would say- I’m so so sorry, just as you did every time the years of your prognosis shortened. But it is not your fault and it’s not mine. None of us have ever had any choice in this obscenity and yet here we are in it, and with guilt as our trusty companion.

I would bring you a cup of tea in your favourite mug, you would wait till it was almost cold to drink it and Celeste would insist on opening your present for you and telling you what it was, much to the annoyance of Flynn who would invariably tell her off for it and so a fight would ensue and that would be the end of that. I would take you somewhere you loved for lunch and life would (as it always was) be glorious.

Instead Cinders is coming round and we will make pancakes for the kids (you would be so proud of the way she has been looking after us). Feargal and Marianna are taking your mum and I out to the Glasshouse for lunch and so we will try hour-by-hour to make this day disappear as quickly as possible.