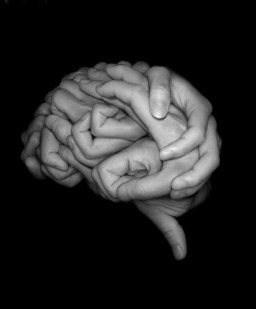 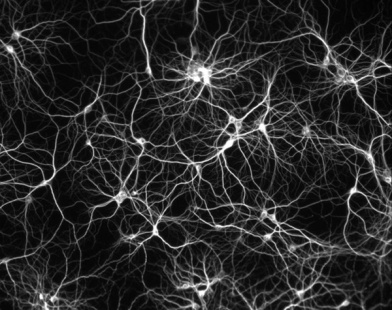 The human brain is composed of about 100 billion neurons plus a trillion glial cells.  It is 73% water. It takes only 2% dehydration to affect your attention, memory and other cognitive skill. Your brain generates about 12-25 watts of electricity. This is enough to power a low wattage LED light. Albert Einstein’s brain weighed 2.71 pounds (1,230 grams) — 10% smaller than the average of 3 pounds (1,400 grams). However, the neuron density of his brain was greater than average. Your brain’s storage capacity is considered virtually unlimited. It doesn’t get “used up” like RAM in your computer. Although pain is processed in your brain, your brain has no pain receptors and feels no pain, despite its billions of neurons. You would effectively need another brain in your body to tell you that your brain was feeling pain. This explains how brain surgery can be performed while the patient is awake with no pain or discomfort.

I know less about the human brain than brain surgeons, maybe, but over the last five years I’d say I know a bit more than your average Jo, layman-wise. I know vaguely the architecture of the brain, cathedrals of soft tissue, that house the eloquent brain, this is where speech and sense is to be found and how we process and understand language, it is this brain that makes us human. It is unlike our animal brain which is only concerned with staying alive and warding off hunger.

I know that while doctors treat illness and disease, cancers, neurosurgeons work in the crucible of identity; ‘every operation on the brain is, by necessity, a manipulation of the substance of ourselves and every conversation with a patient undergoing brain surgery cannot help but confront this fact.’ P.K.

As Neurosurgeon Paul Kalanithi puts it “At those critical junctures, the question is not simply whether to live or die, but what kind of life is worth living. Would you trade your ability-or your mother’s- to talk, for an extra few months of mute life. The expansion of your visual blindspot in exchange for eliminating the small possibility of a fatal brain haemorrhage? Your right hand’s function to stop seizures? How much neurologic suffering would you let your child endure before saying death is preferable? What makes life meaningful enough to go on living?” His colleague concurs “ Sometimes it’s better when they die. Only later would I realise that (our trip) had a dded a new dimension to my understanding of the fact that brains give rise to our ability to form relationship and make life meaningful, and sometimes they break”..

When a family member or someone you love is diagnosed with a brain tumour, bleed, brain cancer, it differs to any other diagnosis in that the brain is no ordinary body part, it is essentially who we are. Therefore with this diagnosis in mind, you may loose this person well before they actually die. In neuroscience this is called  ‘the binding problem’- the extraordinary fact, which nobody can explain, that mere brute matter can give rise to consciousness and sensation. Kalanithi writes- “In those moments, I acted not as I most often did, as death’s enemy, but as its ambassador. I had to help those families understand that the person they knew- the full, vital, independent human- now lived only in the past.”

Henry Marsh (James’ surgeon opens his autobiography with an account of cutting into the brain to cut away a tumour. He writes: “I look down my operating microscope, feeling my way downwards through the soft white substance of the brain, searching for the tumour. The idea that my sucker is moving through thought itself, through emotion and reason,that memories, dreams and reflections should consist of jelly is simply too strange for me to understand. All I can see in front of me is matter.” It isn’t any wonder then that he feels that-“It’s difficult to do nothing. But death is not always a bad outcome, you know, and a quick death can be better than a slow one.”

Kalanithi tells of an operation he performed on a sufferer of Parkinson’s with a tremor in one of his hands. The process involved placing an electrode on the particular part of the brain that was actioning the tremor, electrode paced and the tremor stopped as all eyes were on the man’s hand. However the patient’s voice rose above their murmuring observations ” I feel overwhelmingly sad ” as he began to cry. “Current off” Kalanithi instructs his junior- “Oh now the feeling’s gone”, the man reports. They repeat the procedure a second time. And a second time the man cannot contain his sadness. Which makes one wonder-is grief simply a matter of an active electrical current or over-stimulation of certain neurons?

James tumour was located in the left frontal lobe, the left side of the brain controls reason, language and movement. It’s dominant, unless perhaps you are a serial killer. But the most sacrosanct regions of the cortex are those that control language, comically called Wernicke’s and Broca’s areas. One is responsible for understanding language, the other for producing it. Damage to the former means that although the person may still be able to speak they can no longer understand what is said to them, and the language they do produce may be a series of disjointed phrases, “a grammar without semantics”. Damage to both and the patient become “an isolate” ” After someone suffers a stroke or head trauma, the destruction of these areas often restrains the surgeon’s impulse to save a life. What kind of life exists without language?” P.K.

After, I think James’ second prognosis. I called his surgeon and asked for a blow-by-blow account of what would happen to him . He went into great detail. It was a secret we both held from James and it was a very kind secret.

James’s death was in one way brutal and aggressive, huge amounts of blood on the brain, cerebral oedema (brain swell), followed by a decompressive craniectomy. But as far as he’s concerned he went to sleep after one of many happy days with all those he loved and never woke up. A happy end to an extraordinarily happy life. It is what  all of us would want- particularly so when considering the alternative. Others have not been so lucky.

Terrible job, neurosurgery. Don’t do it.- Henry Marsh- Do No Harm.