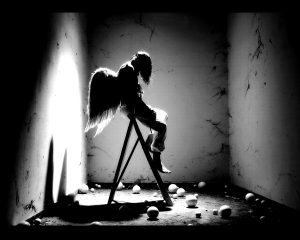 “The man thought he seemed some sad and solitary changeling child announcing the arrival of a traveling spectacle in shire and village who does not know that behind him the players have all been carried off by wolves.”

Anyone looking at my Facebook feed would see a happy, smiley person who would appear to be having the life of Riley. It’s not a total lie, at those given moments I am smiling because at that particular time I am happy. It’s life Jim, but not as we know it. But scratch a little further and a changeling is to be found in place of the original. This changeling is clever and also deceptive. Some have fallen hook, line and sinker for her almost identical adaptation. She looks like me, dresses like me and speaks like me, but she lacks radiance and delight. She is also devoid of any kind of joy, despite those constant forged smiles and giggles timed to precision.

Those who truly loved her predecessor are not so easily fooled by this duplicity, still, they hang around regardless, hoping for an occasional and honest glimpse of the original, but they are often left disappointed and unsure as to whether what they saw was even a glimpse at all or a trick.

One of the greatest mistakes that people make is thinking that this is me. I find it almost impossible to deal with people who treat me as the same person I was a year ago. I’m transformed almost totally. A friend teased me about the fact that my teeth are not straight a few weeks ago, this is something she’d always done but she forgot that she can’t do this anymore because the new me just can’t take it. The old me would have joined in but the new me can’t. Others have asked which outfit I prefer as they go through each option, as if I might have an opinion on this, like the old me would have. It’s not their fault, the changing is just that good at her stealthily fraudulence .

A friend told me that when her mother died she found that sometimes she couldn’t even cross the road, she felt so vulnerable. The only way round it really is to surround yourself with ‘safe’ people.

I do still try to go to parties and large gatherings but the level of courage it takes often makes this type of thing impossible. It helps if I know members of The Pod might be there. Others who are not in The Pod directly seem to know this without me ever having had to tell them and so they make sure that I am sat next to the Pod’s most inner circle when these events occur and that helps too.

Euripides said “When a good man is hurt, all who would be called good must suffer with him.” We can only hope that the changeling will return her original one day and the good will reap their reward, ‘Just tell me when it kicks in.’

For Fergal, my brother-in Law (a good safe bet).

Very proud of my lovely friend Feri- Please see below.

3 thoughts on “The Girl Without An Echo.”