Ode to the things that come in the mail.

I am blessed with a very crazy daughter and a very kind son. When Flynn wakes up in the morning, he takes himself downstairs and makes himself breakfast and puts on his favourite shows on Netflix. When I ask (gratefully) why didn’t you come get me? He just says “I didn’t want to wake you.” He is indeed his father’s son. This leaves me to often wake up alone. This would often be the case when I was married to James but obviously without the sadness. Usually Celeste slept with James and although we have the most ridiculously giant bed, I was pushed out and would sleep in Celeste’s room. I often peeped in at them sleeping in this way and they looked like twins (if you ignored the beard). So mornings are often for mourning, in that five minutes I get before they realise I am up. The sadness stops often when the post comes and here is why. Because people are amazing and here are some of the things I have been sent in the mail, sometimes even email.

First is this post from my friend Betsy in America. That made me happy for an hour or so. 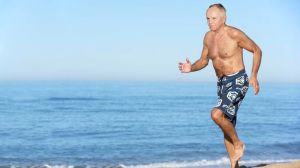 CABO SAN LUCAS—Acclaimed novelist Cormac McCarthy, 79, wowed Cabo beachgoers Wednesday after debuting his sizzling new summer physique in a light-blue Vilebrequin swimsuit that showed off at least 20 extra pounds of lean muscle. “I got into this routine where I was just hitting the gym every morning, writing some of my novel in the afternoon, and then hitting the gym again later that day, and it paid off,” the Pulitzer Prize–winning author of Blood Meridian told reporters as he massaged his washboard abs with deep tanning oil. “I didn’t go in for any of that carve-and-starve stuff, so I just upped my cardio, did two-a-days, and took an Isagenix whey protein shake every morning. Feels good to look good, you know?” At press time, the prose master was performing a surfside workout sequence of lunges and squat thrusts.

Then came a letter all the way from Nairobi with the very important message: * ‘That Yorkshire man with the best voice is Geoffrey Boycott- James would want you to know that.’

When I posted in ‘Tinderella’ that Flynn had worries, this arrived two days later from my brother in Ireland. It’s called a worry eater. You simply put the worry in its mouth and it eats it all up. Flynn put his one worry in there. It said- ‘I worry if dad is okey’. He left it at Matt and Tara’s house, Matt delivered it next day, minus the worry. Flynn couldn’t believe it when he opened its mouth. Later that day he told me- “Well mum it was more of a hope than a worry.” It’s since been replaced with ‘ I worry I won’t go to Legoland soon……..’

When It was James’ birthday, his cousin sent me a bottle of beautiful Moroccan Rose bath oil with a card that said- Because I know James used to always give you treats, I thought you should have one on his birthday.

On this birthday my best friend gave me the below, well for obvious penchant reasons.

On my wedding anniversary this arrived from my friend Lex, who never forgets these things.

Then last week my friend laura sent me the following note with a beautiful bracelet she’d had made. It’s engraved with the following:  TRUE GRIT ALWAYS.

Really there’s not much that will make me feel better these days but these big, and small gestures really do help. They are not going to bring James back, nothing can do that. All these gestures, they are something, and something is better than nothing and when you are faced with nothing you’ll take something. 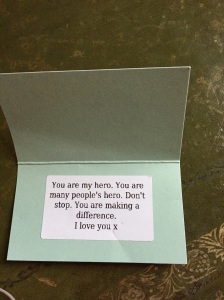