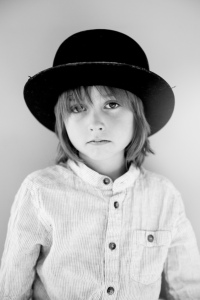 James used to joke that I dressed our son like an extra from ‘O brother where art thou’ (one of our favourite films). He would call Flynn the fifth member of Mumford and Sons and ask whether I’d remembered to apply his Dapper Dan. I guess I knew what he meant as when it was world book day and I decided he’d go as Oliver Twist, I looked to his wardrobe for his costume and not the dressing-up box.

But really it was James who oversaw his musical influences. I worry that he’s already becoming more of a Major Lazer Lad than a Bastile boy. And that’s just music. I do so worry about how to inject a whole dollop of masculinity into his life. I’ve never been a girly girl but he is missing not just a Dad in his life but a man. He’s already asking me which football team is better Chelsea or Arsenal? All I know about Chelsea is that I used to live next to the pitch and they used to piss on our doorstep after a match. The fans that is not the players, but who knows. And that a Chelsea smile is not a good thing. So I say: Tottenham. But what if I’m wrong, it won’t be the first time, after all I used to want Bill Cosby as a dad. It’s a real worry.

For all my Soggy Bottom Boys who are trying to help me raise a boy and not a man of constant sorrow.

Last night at about 9.30 came a knock on the door. I leapt to my feet like Mrs Lovett “Wait, a customer!” from Sweeney Todd. My friend Vicky arrived on my doorstep bearing these gifts. She had just read EAT SLEEP RAVE REPEAT, yesterday’s post.

9 thoughts on “O Brother where art thou?”